Learn Exactly What It Takes To Raise Your Dream Puppy 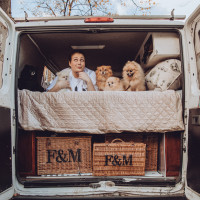 Kimberly Marie Freeman, has over 17 years extensive experience and know how having worked with, and studied dogs in London, Dundee and New York City.

While in Dundee, Scotland, Kimberly owned and operated the largest dog walking, pet sitting, and behavioral center on the East Coast of Scotland which became the catalyst for the rest of her canine based career.

Over the years, with the support of her 4-legged friends, Folly, Jester, Broadway, Vaudeville and Garbo, Kimberly has honed her skills and developed her reputation as a Trainer and Motivator.

Kimberly brings unique skills to her chosen field, with particular emphasis on a dogs life. She is an animal behaviour and nutrition expert with a special interest in rescue and rehabilitation of animals and has followed programs at the world renowned Animal Care College.

Her focus is on force free training and positive reinforcement.

Kimberly is also a member of the Association of Professional Dog Trainers (APDT), The Association of Pet Dog Trainers (APDT), Animal Behaviour & Training Council,Pet Professional Guild, National Association of Registered Pet Sitters (NARPS), PSI-Pet Sitters International, and is also a Canine First Aider, a Member of The Institute for Animal Care Education (IACE), and is qualified in administering the AKC Canine Good Citizen Preparation Classes (CGC). In addition, an assessor and volunteer at Canine Concern and a fundraiser at Operation OKdog.

Having studied Psychology and Philosophy at University, Kimberly is capable of skillfully blending the control and mastery of the Owner with the obedience and intelligence of the dog helping propel their training relationship to a new level.

All is not work, however. Kimberly enjoys the fun of training your dog to be a fly ball whizz, pose for pictures or tv work, and is also known for gun dog training, her work with Search and Rescue teams, for agility training and for introducing suitable dogs into the service world while also offering training to sharpen the skills of animals already in service.

In her non dog hours (although they are few), Kimberly is often seen performing on stage or screen, guest speaking, taking the dogs on campervan adventures, and having random trips around the World.